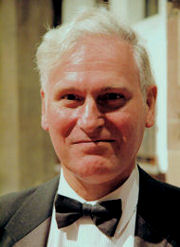 Peter Wood, born 1942, studied with TJ Longstaff and Harold Truscott, and has written music continuously since the age of five. He has written many short scale pieces for piano and organ pieces for church use, as well as for a variety of instruments and ensembles.

He describes himself as an "opportunist" and will write for whatever instrumentation is available.

This composer has, in his own words, "struggled along in the backwaters, working in a bank and doing what I like best in my spare time". Retirement from fulltime work has allowed him to put his efforts into small scale works, which have been performed in concerts organised by the Lakeland Composers group. He still writes large scale works and rewrites older pieces in the hope that one day "something will come along to fulfill my ambitions". Peter's longest recent work is his Violin Concerto.

He believes that several of his organ, violin works and piano pieces are likely to be found worthy. However, he has also been exploring newer avenues recently. His musical reworking of a scene from Shakespeare's Macbeth featured singing voices for the main character parts and spoken voices for the minor character parts.