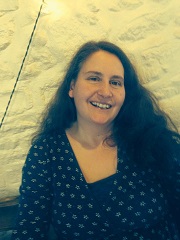 Melody Rowe studied at the London College of Music in 1983-86 and during her time there was awarded a discretionary 'Honours award' from John McCabe for her performance of 20th century compositions for piano, where for the first time an entire programme of current music was permitted for her final performance. Her interest for new music was inspired by her tutor, the music analyst, composition and piano teacher Susan Bradshaw. Melody went on to train and work as a music therapist at Bristol University under Leslie Bunt, where her passion for creating new music, but with others and for therapy, continues.

Following her involvement with the Amabile choir,as a tutor to the youngest singers and pianist for the junior choir. Melody resumed her interest in composition in 2008. A composition was commissioned from Melody in 2010 from The Amabile Girls Choir (under Frances Chiasson) for the main choir. A 'BBC Chorister Award' was granted for this commission and the completed work 'Earth Tide' (four movements) was given its premier performance by the Amabile Girls Choir at the summer Sedbergh Music Festival 2010 and followed closely by a performance at the Westmorland Music Festival.

Her recent vocal compositions include 'Japan, the Old Country' three songs for Girls choir (Junior choir), 'Purlan and the moon' a mini musical for young children (5-8), 'Find the freedom' (a fast moving round). Other work for adults include solo songs and choral pieces for women's choirs(Fireside songs: Illumination and The Angels). Melody is currently writing solo songs and a commissioned orchestral piece.